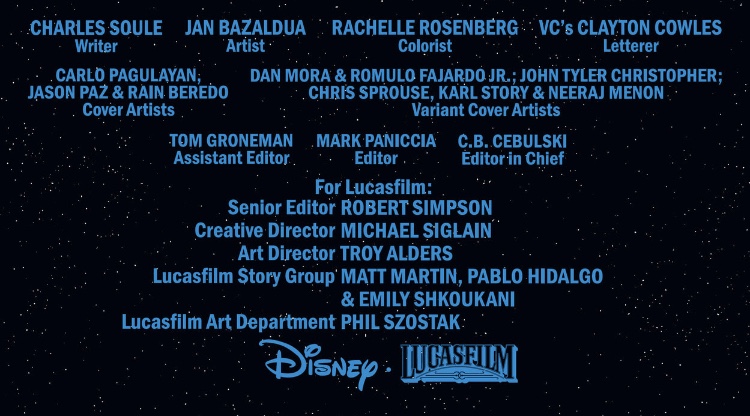 Lobot’s life hangs in the balance whilst Starlight Squadron faces off against Zahra’s Star Destroyer and take on a daring mission into the heart of Zahra’s ship.

Lando and Kes’ showdown comes to a head whilst C-3PO is up to something. He manages to download the needed language into his own memory and turns off the Talky, freeing Lobot in time to get him to the Med-Centre and save him. Lando becomes distrustful of the Rebels after they were willing to risk Lobot’s life. He contacts Jabba, and instead of sending Rebel codes he agrees to send the deactivated Talky.

Meanwhile, Starlight Squadron is in trouble. They have no way to escape to Hyperspace without the Astromech’s to help navigate and syncing the X-Wings and A-Wings computers would take too long. When they get stuck in tractor beams they destroy the emitters before flying into to main dock in bay and blow up as much as they can. When Zahra sends ground forces in, Shara has the rest of the Squadron to hold them back. They steal an Imperial Astromech and Shara downloads as much information on the Empire’s dealings before sending the Squadron back to base after her ship is destroyed in the battle.

When the fleet are informed of what’s happened, Leia announces that they will take the fight to Zahra.

This issue left me feeling unimpressed. I hate to say it but it did. The Lobot storyline was predictable (and I’m not just saying that because I already knew he survived thanks to his appearance in a post-Return of the Jedi novel), but the whole story with the Talky was essentially to allow C-3PO to learn this new (old) language. I’m also really not all that keen on the whole Lando double-crossing the Rebellion. Sure, by the end we’ll find out it’s some sort of triple-cross that gets Lando into Jabba’s Palace in time for ‘Return of the Jedi’ but it just feels convoluted, and if he does get found out, why would he end up getting promoted to General (other than his manoeuvre at the Battle of Tanaab).

The Starlight Squadron story arc felt more interesting to me, and the whole attacking the inside of a Star Destroyer with starfighters is nothing less than genius. My issue here, however, is one that I have had before and I feel like an idiot for it being such an issue, but the stakes aren’t high. There are three characters in Starlight Squadron who are essentially untouchable and be of those is left behind enemy lines. As I’m reading it I feel like banging my head against a wall because I already know what happens and it made the cliffhanger ending feel redundant.

I have a feeling that I’m feeling this because of ‘The High Republic’. I’m not saying it’s a bad thing, but now we have been introduced to this brand new era, with new characters and genuine high stakes which whereas this run of ‘Star Wars’, being set between two films and with a number of stories set later in the timeline is essentially filling in the gaps, which is no bad thing, as it does add to the overall story of the saga.

Whilst the issue, and the story are enjoyable, I’m starting to find the lack of suspense a bit dull. Where other series like ‘The High Republic’ and ‘Doctor Aphra’ don’t have major ties to the stories that films tell, this run and to a degree, the ‘Darth Vader’ series have a defined ending which takes away most of the sense of surprise, which is a bit disappointing for me.

If you would like to support ‘My Star Wars Life Debt’ please visit the SUPPORT PAGE to see how.