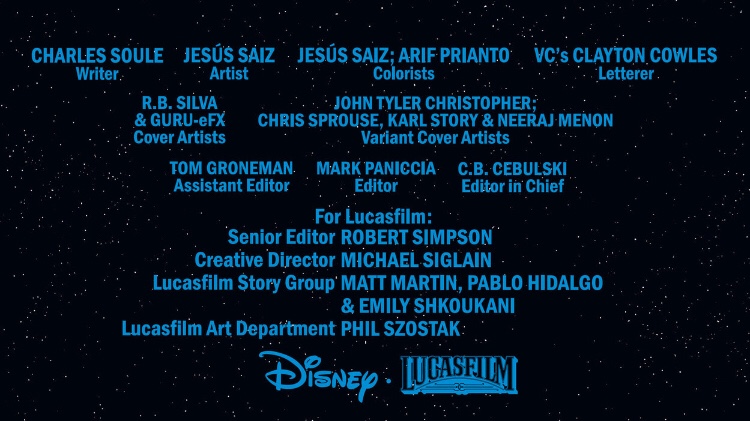 The final part of Charles Soule’s first arc in the main ‘Star Wars’ run has come to an end, but not with a bang, but a rather satisfying whisper.

After being rescued by R2, Luke learns more about the Jedi from Veela, including the name of his father, Anakin Skywalker. She tells him about an old Jedi Stronghold on Tempes, dating back to the High Republic where Luke finds an old lightsaber.

He sets off a trap however and a vision/spirit of the Grand Inquisitor appears and attacks him, the two battle until Luke manages to escape.

Meanwhile, Vader is told about the trap going off, once on Tempes he berates the Inquisitor who fades away.

Luke returns to the Rebellion, and after a word of encouragement from Leia he ignited his new, yellow lightsaber, bringing hope to the small group of gathered freedom fighters.

The bulk of the issue feels like exposition, leading Luke to learn more about the Force and Anakin, all things that need to be addressed given his knowledge in ‘Return of the Jedi’. The new yellow lightsaber is an interesting addition, and may give him insight to building his new one before giving it to R2.

The mentions of the ‘High Republic’ stuck out, and if I’m not mistaken, the Temple Luke visits on Tempes is the same one Luke takes Lor San Tekka and Ben Solo to in ‘The Rise of Kylo Ren’, also written by Charles Soule, and if it’s not then we are starting to learn more about the Jedi during the ‘High Republic’.

Again, the lack of storyline featuring any of the other Rebels is frustrating, but now we are moving onto a new story arc in the next issue, the focus may start to shift away from the main heroes and focus a bit more on some new characters.

As the last issue in this first arc, it puts a pin in Luke’s story for a little while at least. I won’t be surprised to see him go off on another adventure or two, but hopefully he’ll get some time to decompress a bit as he’s still got to process a lot of traumatic things and has seemingly been running on adrenaline for this arc. Charles Soule has given us a great story so far and I hope that continues for the duration of his run on this title.