This was one of those sets that I missed out on as I started collecting Lego again. Based on the vehicle from ‘Star Wars: Rebels’ which in turn is based on an original concept that Kenner produced in the 70’s and 80’s as part of a set of smaller vehicles.

It also recently made it’s live action debut in Chapter 7 of ‘The Mandalorian’ so I’m sure we’ll get an updated version at some point. 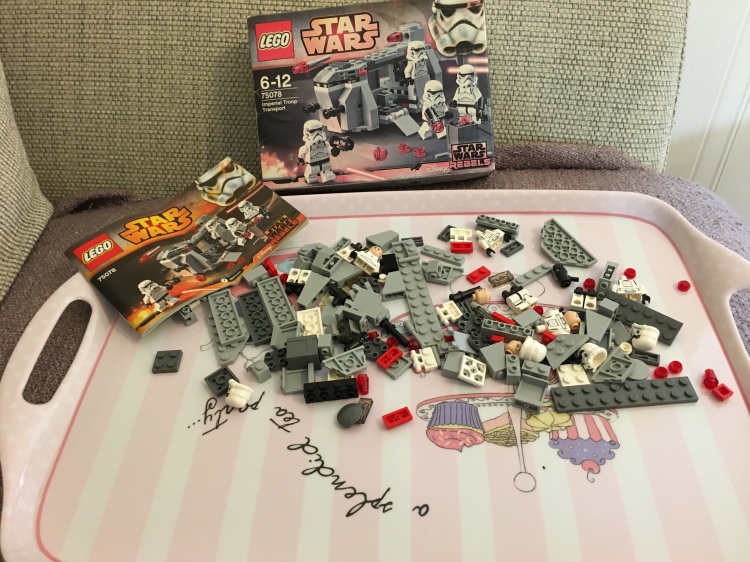 Because I picked this up as part of a deal on Facebook Marketplace, it was already built, so I have deconstructed it and given it a clean. It originally came in one bag with the instructions.

First up, let’s talk mini-figs. Because this is an Imperial Troop Transport, having any other mini-figs other then four Stormtroopers would feel a bit off. They all include stud launcher blasters as is customary for Battle Packs. The four figures are identical and great for collectors looking to build armies.

The build itself is really well constructed and feels like a different type of build than the Battle Packs I have built over the last few years. Firstly, it’s a canon vehicle, which I have only seen once before with the Imperial Speeder Bike from the first ‘Solo’ wave. Secondly, it’s quite large for a typical Battle Pack and has room to store all four Troopers as well as a crate that slides into the middle with four studs as back-up ammo.

When completed, with all the Troopers in place this is a really good looking little set, and it’s set a very high standard for what the Battle Packs could be.

In terms of the screen accuracy, the vehicle is a little small in relation to the figures and there isn’t room in the cockpit for anyone to actually drive the vehicle, but despite that, the vehicle is actually pretty accurate to the ‘Rebels’ stye.

In terms of play features, the vehicle has two push missiles on the top in a rotating turret rather than having more stud launchers. There are two blasters on the front that don’t include play features but are there as part if the vehicles design.

Overall,, its a really nice set but, like I said before, the more recent Battle Packs feel somewhat lacking in comparison. Granted, I tend to get them more for the mini-figs than anything else.

If you would like to contribute to the upkeep of the blog please visit the Patreon Page HERE.