If you weren’t intrigued by ‘Project Luminous’ before, hearing the concept of ‘the Jedi Knights of the Round Table’ certainly should have piqued your interest.

For the record, I was intrigued by the whole ‘Project Luminous’ idea. All of those great authors coming together for this grand project, then the rumours of ‘The High Republic’ only managed to get me more and more excited for the whole thing.

Once we got the Press Event and the promotional images I was all in, hook, line and sinker. This was something I had been wanting to see from the new Canon for a while, a whole new era, an ongoing series of sorts, huge crossovers. The waters had been tested last year with the ‘Alphabet Squadron’/’TIE Fighter’ crossover between Del Rey and Marvel and it seemed to be successful, so why not try it on a much larger scale, a publishing MCU so to speak.

Of course, the Press Event didn’t give much away, essentially an announcement of the concept, cover art, promotional art and release dates, and of course the four minute trailer showing a lot of behind l-the-scenes stuff and some great sound bites.

I remember watching the Special Features on the ‘Attack of the Clones’ DVD and George Lucas saying that we were seeing the heyday of the Jedi, but I honestly don’t believe that, I think he was saying it as misdirection so that we would believe we were, but the events of ‘Revenge of the Sith’ and later ‘The Clone Wars’ really show that the entire Prequel era, right back to ‘The Phantom Menace’ was actually the story of how the Jedi failed, and that failure led to their downfall.

But now, with ‘The High Republic’ I really do believe that we will be seeing the true heyday of the Jedi Order.

Just look at them. There is something about them that feels special, they feel powerful but not in a way that feels threatening, in fact they come across completely the opposite. Right there they look like true protectors, real Knights, unlike the monk-like aesthetic the Jedi of the Prequel era have.

Another point of interest is the lightsabers in this time. In the picture above, we get to see a selection of different styles, including new cross guard lightsabers where the guard is part of the hilt rather than quillion blades like Kylo Ren’s saber, or the one that Ezra found on Malachor. We also get a double blades lightsaber and the variety of colours is the same as what we get in the Prequel Trilogy. 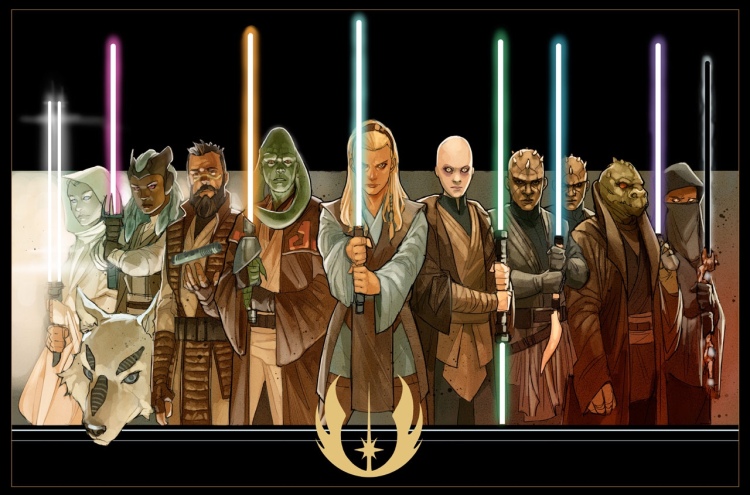 However, this picture gives us another look and there are a few lightsabers of note here. Firstly, let’s start from the left hand side, the character in a white robe with a double bladed lightsaber but made to look like a barbecue fork. Almost like Dark Rey in ‘The Rise of Skywalker’ before she unfolds it to a more standard double blade configuration. Not to mention how the blades are white like Ahsoka’s in ‘Rebels’.

Let’s jump across to the Twi’Lek with the orange blade. An interesting colour which was introduced into canon in ‘Jedi: Fallen Order’.

Then there is the character on the far right, wielding what looks like a Darksaber, which we have only seen one of before, made by Tarre Viszla and wielded by Pre Viszla, Maul, Sabine Wren and now Moff Gideon. Could this be Tarre Viszla or has it been stolen back by the Mandalorians by this point.

The one thing their lightsabers all have in common is the ornate look of the weapons. These aren’t generally weapons to the Jedi of the High Republic. Perhaps for those who patrol the borders of the known Galaxy, but for many they would be more a symbol, a rite of passage for Padawan’s to go through on their way to Jedi Knighthood. Each one looks completely individual and designed based on the needs of the wielder, just look at the Trandoshan, their hilt looks more like a fun and it’s probably due to the species physiology. The Twi’Lek’s hilt looks like a fencing rapier and Zabrak’s weapon has a long claw or tooth attached to it. These designs really show off the individuality of the Jedi here, I like those during the Prequel Era which all look relatively similar, I think the only one with a bit of flair is Mace Windu’s.

It’s safe to say that the Jedi of the High Republic will be different from those we meet in the Prequel Era and I hope that through the stories we will start to learn how the Jedi lost their way. Perhaps the events that we will be learning about will bring about those changes. Of course this is all speculation and we won’t know much until August, and I really can’t wait to find out.