When it came to the Triple Force Friday Lego sets, I knew the one set that I had to get, and luckily I did (as well as the Resistance A-Wing) and that was the wholly original release, the ‘Pasaana Speeder Chase’ set.

“Why was that?” I hear you ask. Well it’s the only one from the whole of Them Rose of Skywalker’ wave that isn’t an update of an older set. Don’t get me wrong, I want to get those updated sets, but on day one (or two for me) I wanted to get the new thing, or things, seeing as it’s two builds. 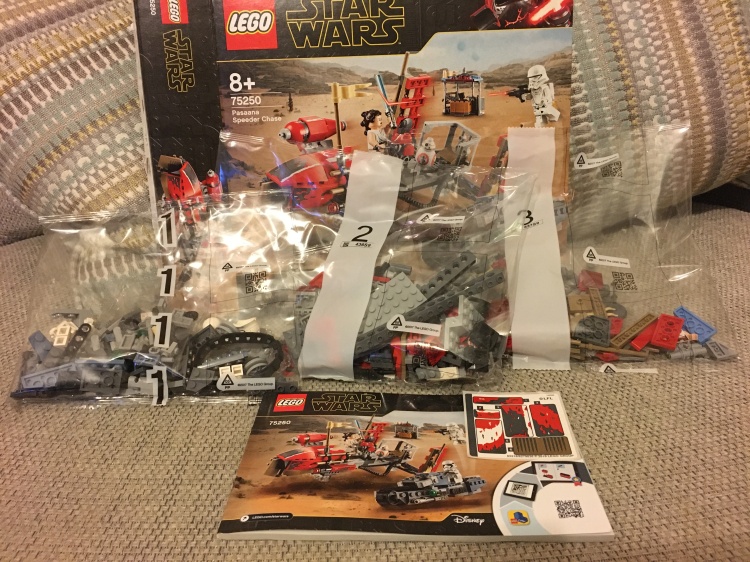 The box contains three numbered bags which contain the 373 pieces, which for the RRP of £44.99 feels a bit short, but at the same time I was happy to pay it, especially when the majority of the other sets in the wave seem to have a better price/piece ratio. It also comes with a small sticker sheet and the instructions. 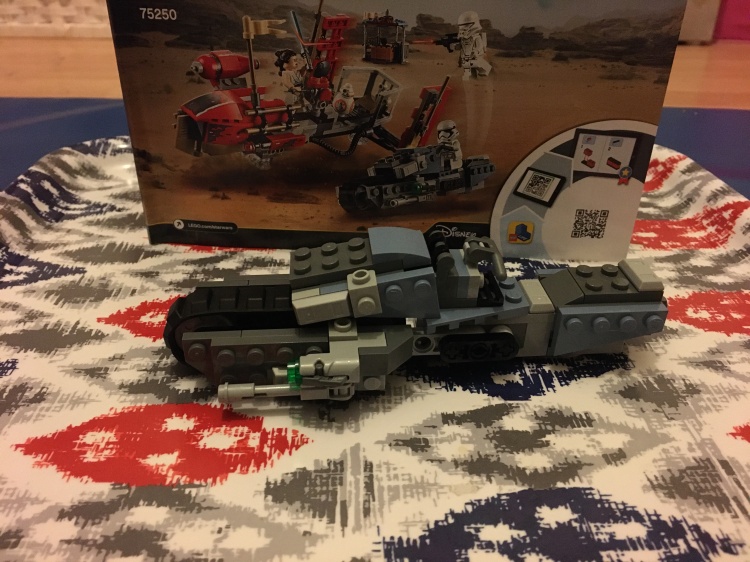 Bag 1 is the all new First Order Treadspeeder. This new vehicle is designed to manoeuvre on unstable terrain that traditional speeders may find difficult. It’s a small, on person patrol vehicle and heavily armoured and as far as I can tell, from the various images online that came from Star Wars Celebration Chicago earlier this year, it looks pretty spot-on.

It’s a decent little build, that if it was sold on its own would make a great Battle Pack, but the size and piece count would be a bit high so I suspect that’s why it was bundled with the other vehicle.

I enjoyed building this, probably because it’s my first set with a tread and found that interesting how it was all put together with that in mind.

Bag 1 also gives us the First Order representatives of the set, the First Order Stormtrooper (…yay!) and the brand new First Order Jet Trooper. The Stormtrooper is the same one we have had from ‘The Force Awakens’ and ‘The Last Jedi’ so nothing new there. The Jet Trooper has a new printed torso and legs and has a custom moulded jet pack which you put a printed 1×1 plate to add detail. The helmet is pretty accurate based on what little we have seen of these guys but all in all it’s a nice mini-fig.

The second bag builds the bulk of the Pasaana Speeder. I really enjoyed putting this together and seeing how they put it together. The detailing on the deck looks really good with a few grate pieces but enough 1×2 pieces to allow the mini-figs to stand without falling all over the place.

I really like the use of the red which looks striking against the black and grey of the rest of the set.

This part of the set is sticker heavy which some builders don’t like but, whilst they can be a bit fiddly for my liking they do add to the level of detail on any set they are used on. 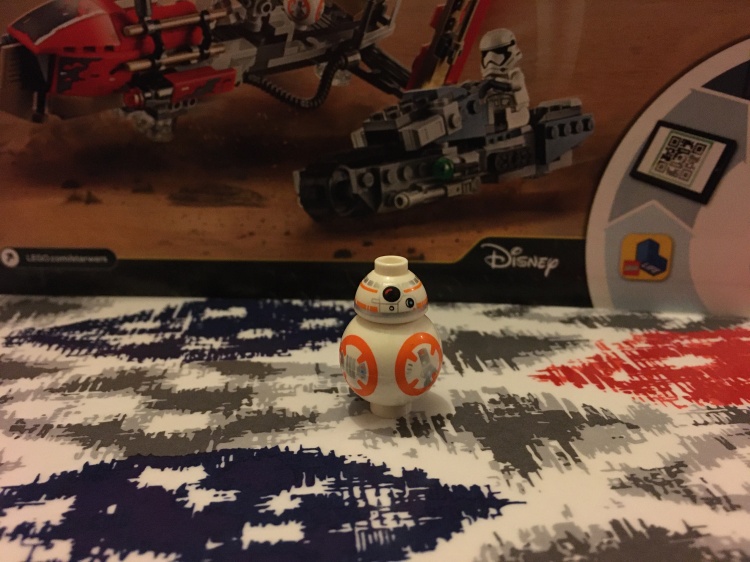 And oh look, a BB-8. This is the one time this mini-fig appears in this wave so it could indicate his appearance in this scene or it could be the case that they needed to put him into a set for the new film.

The third and final bag completed the Pasaana Speeder by adding the final details, the pylons at the back, engine, flag, steering column and rudder(?) at the front. Overall the final look of the build is pretty nice but I can’t attest to the accuracy at the time of writing (the day before the new Trailer) but I’m sure it’s pretty spot on. 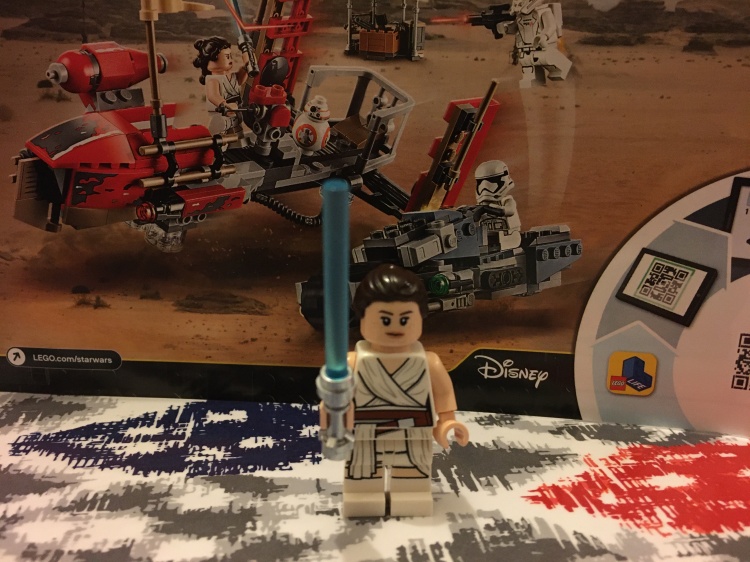 We also get the new ‘The Rise of Skywalker’ Rey mini-fig, wearing the white outfit and wielding the blue Lightsaber. She has a double sided head, smiling and determined and a hairpiece that is the same, or similar to the ones we got with the Rey figures from Them Force Awakens’ sets.

cenery anyone? The low point of the set is this little hit with tool-box. I get the feeling that Lego felt they needed to add some more to the set to justify the price which resulted in this Pasaana hut, which we see in the D23 footage of the Pasaana festival. It’s a decent little build but is it really necessary?

Overall I really enjoyed building this set. Although the Pasaana Speeder feels reminiscent of Jabba’s Skiff set it’s a different enough build as to not feel like a rehash and the Tread Speeder is a great build, even though it could have easily been a Battle Pack set. Once again my only issue is the hut. Nice bit of scenery? Yes, but unnecessary as without it the price could be lowered.