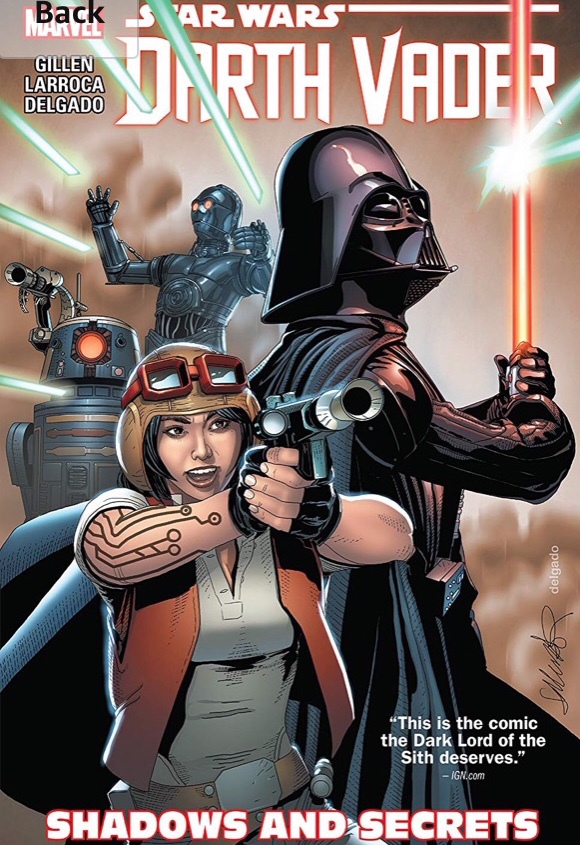 The Vader series continues at an astonishing pace in the second volume where Vader uses Aphra and her ties to the underworld to sabotage an Imperial shipment of credits and foil a series of investigations by his rivals for the Emperor’s favour.

Vader is assigned a new assistant/investigator, Imperial Investigator Thanoth by Grand General Tagge, an older and much more formidable detective than his predecessor Bader must work in the shadows to cover his tracks to avoid being discovered, all the while following leads to connect other gangsters to the crime he had committed.

This arc felt a lot more linear than the previous one that jumped around quite a bit before reaching its finale. As well as the much needed Vader hacking/slashing/general dismembering we also get a story filled with intrigue, a deeper look at the criminal underworld and more of Vader’s hunt for Skywalker.

The introduction of Thanoth is great and he makes a great counterpart to Vader during their investigation, he’s a well used and well written new character and I hope to see more from him throughout the rest of the series.

As far as Vader’s adversaries built by Dr. Cylo, we see them given similar tasks to Vader in an effort to pit them all against each other to see who comes out the stronger. Vader manages to complete his and the task assigned to the Twins and at the end is sent co-ordinates by the General Grievous/Mon Cal mash-up, Commander Karbin which leads straight into the Star Wars/Vader cross-over event ‘Vader Down’.

The writing, art and colours are all spot on, the team continued to put out a quality story that keeps you on the edge of your seat. We already know the outcome of course but there’s so much going on you get sucked in.

Doctor Aphra, BT and 000 continue to be highlights in this series and you never know if she will make it through an arc (she of course does because she got her own series but at the time her fate was up in the air) and they are always a delight to read.

A well paced story and well worth a read, I can’t recommend this series enough, and I’m only 2/5 the way through.