I’ve been interested in this set for a while, the dirty R2-D2 and the Jedi Training Luke Skywalker mini-fig are great looking figures and the price isn’t bad for the piece count, £25.99 for 229 pieces is pretty good, but the timing never felt right. Either there were better deals or I just didn’t have the money that week I kept putting it off, even a couple of weeks ago when it dropped to £20.99 on Amazon I still held back.

Turns out that was the smart move because I managed to get it for £16 on Amazon Warehouse Deals. The reason was that the box was damaged.

When they told me the box was damaged and with £10 off of RRP I was expecting it to be a mess, not at all, a couple of dents and a creased end.

The box itself contains two numbered bags an the instruction booklet. No stickers in the set either which is a rarity these days and quite pleasant at times as getting the stickers just right can become quite stressful at times. 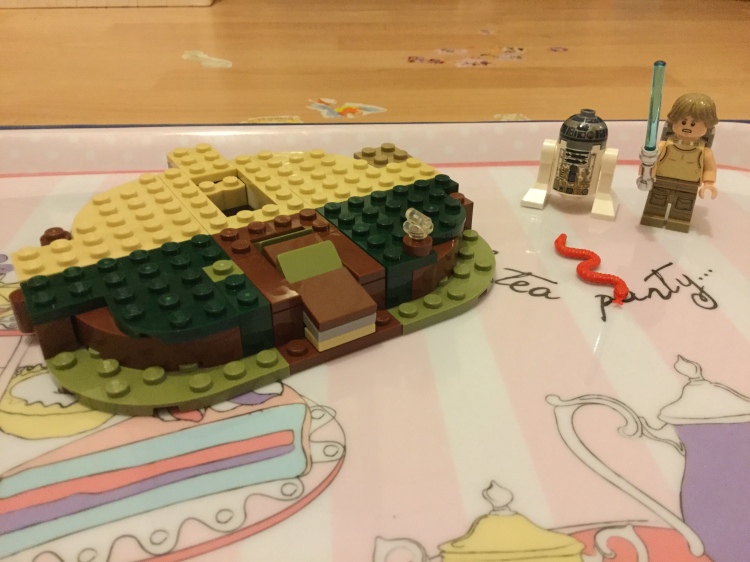 Bag 1 features Luke Skywalker in his Dagobah training outfit with lightsaber and a ‘backpack’ to carry Yoda on as well as a dirty R2-D2 who is covered in swamp dirt and mud.

The rest of the contents build the base of the set. This is done in four main sections that all connect together. The two green sections fold out and the brown one in the middle can be removed and placed at the front door of the hut. The brown section contains a springboard play feature to make Luke perform a force enhanced jump.

Bag 2 comes with the Yoda mini-fig and completes the set by building the hut itself and the outside features.

The exterior of the hut looks great, very screen accurate and I love the white round 2×2 plates that make up the smoke coming from the chimney.

The interior of the hut features a fold down bed, a fireplace (with fire) and pot to cook in, a stove and a carrot. It’s quite cosy in there but you don’t need much space when you are Yoda. 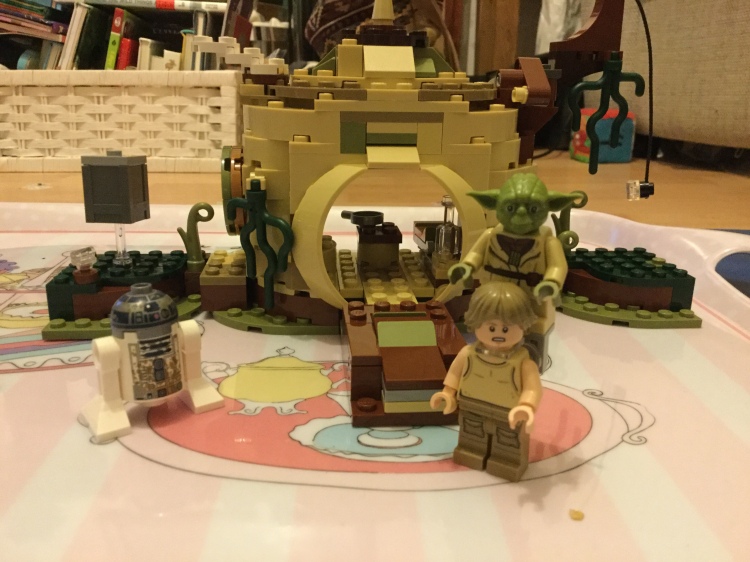 When the set is displayed in full ‘play’ mode we get various areas for Luke to train in. On one side Luke can be displayed performing a one handed hand-stand and a crate is held over the ground on a transparent pole to emulate it floating through the Force. On the other side is a tree with a rope for Luke to swing on. At the top of the tree is a lever that when pushed allows Luke to drop when holding on the rope allowing him to swing.

As far as playability this is a great set for kids. There is enough here to allow them to replicate Luke’s training and have fun inside the hut. As far as display (for adults) I would have liked the set to be a bit bigger, or have the fold out sections to be added parts to the hut. Of course Lego is made for kids and this isn’t an Ultimate Collectors Series model.

As far as the mini-figs go I love the R2-D2 which looks great covered in mud. The Luke Skywalker is well detailed and the reversible head shows a determined Luke and an meditating Luke.

The Yoda mini-fig features a new print on the torso more reminiscent of his ‘Empire Strikes Back’ outfit and not just repacked the mini-fig from ‘Yoda’s Jedi Starfighter’.

I think, had I bought it at the full £26 RRP I would have been disappointed, whilst made to be of a similar scale as the ‘Ahch-To Training Set’ (that I reviewed HERE) I found that set to be a much better build and more worthy of the £26 price. Whilst still a good set, I must recommend waiting for the price to drop to around £20.