Last night J.J. Abrams tweeted about the wrap of filming ‘Episode IX’ and gave us a picture of Rey, Finn and Poe in a group hug. 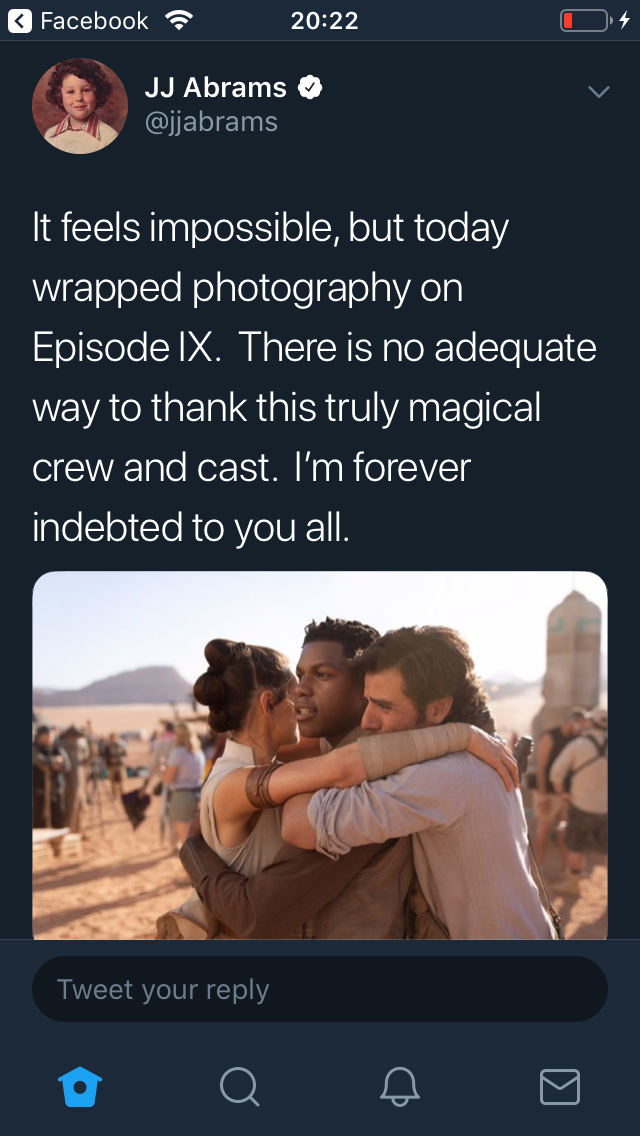 Let’s get a closer at that picture… 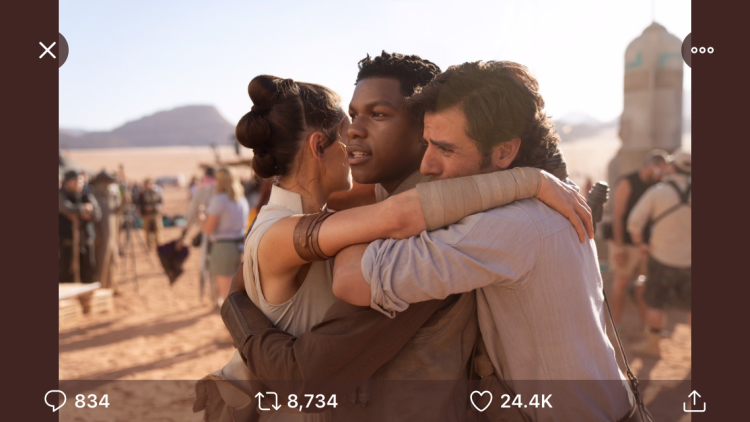 What an we see in this picture? Finn has longer hair, Poe is crying and Rey is looking elsewhere.

From what I can gather from the picture, this is from the Jordan set, which was filmed last October/November. I also wonder if this is a rehearsal given the crew in the background, granted, the crew may be out of shot with the filming taking place from the left hand side.

We get a look at Rey’s hair which had been previously reported on MAKINGSTARWARS.NET (CAUTION! SPOILERS) being similar, if not the same as her ‘The Force Awakens’ hair style. According to Jason Ward’s latest POST (CAUTION! SPOILERS). Rey’s hair is back in this style to fit in with footage of Carrie Fisher as General Leia. This was something I hadn’t considered when writing and discussing Rey’s costume. The similarities to her ‘The Force Awakens’ outfit have obviously been made for that reason and my stance on the lack of creativity in the costume department has relaxed. Does this mean we will get a Kylo/Leia scene?

Given the Leia information, Rey not looking in the same direction, Finn’s look of wonder and Poe’s emotional state, could they be witnessing Leia’s final moments? Does she pass into the Force like Luke? Given the close relationship between Poe and Leia I can only speculate that her passing would hit him harder emotionally and Rey is finding it hard to see Leia pass on.

There is speculation that this is Tatooine or Jakku, but given the rumour mill and the information from Jason Ward I can only wonder if this is a new planet OR Jedha, seeing as a number of Jedha scenes were shot in Jordan for ‘Rogue One: A Star Wars Story’. My thoughts are a new planet and the macguffin is something important on the planet, I don’t see why they would go back to Jakku, I feel that part of Rey’s life is done and the only reason to include Tatooine, even though it would be fitting to go back to where it all began it would only be fan service at this point.

Of course this is all rumour and speculation based on a photograph and I am sure that half of my theories could be wrong. Maybe Poe and Rey are just happy to see Finn.